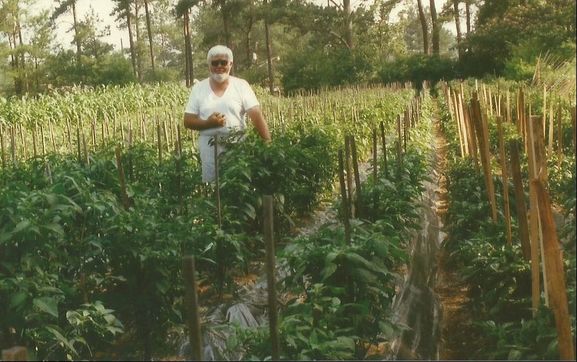 ​In the mid-1970’s, Fred Smith found a “hot” new hobby.  He started growing jalepeno peppers. Fred enjoyed growing peppers, but soon he was searching for new ways to use the peppers. After experimenting for several year, Fred created his own favorite jalapeno hot sauce. Friends and family members were always glad to get the free samples of Fred’s “experiments.” For almost 20 years, if someone brought Fred an empty bottle or container, he would fill it up with his hot sauce for free. Some friends even encouraged Fred to sell his homemade hot sauce. By now, Fred was making 50-100 gallons of hot sauce per year, as the pepper patch and his hobby continued to grow.  One day, Fred’s wife, Sally complained that the 50 gallons of hot sauce sitting in her storage room was just taking up too much space. With a plan to move all that hot sauce out of her way, Sally suggested to Fred that he sell it. Although Fred had never thought of selling his hot sauce, he decided to try to please his wife and found a bottle supplier.  Fred and Sally gave their 10 year old son, Alex, the task of designing a label for the bottles.  To Fred’s surprise, within a month, Sally’s storage room was empty of hot sauce. It was time to take Fred’s hobby to the next level and Alabama Sunshine was born.

When the Smiths decided to go commercial with Fred’s hot sauce, they needed a health department approved facility.  Consequently, from 1994 to 1995, Fred and Sally rented a local sandwich vendor’s kitchen several nights a week from 5 p.m. until midnight to cook and bottle hot sauce.  From 1995 until the present, Fred and Sally have had their own commercial kitchen where they have continued make Fred’s original Alabama Sunshine jalapeno sauce, as well as many other new products. 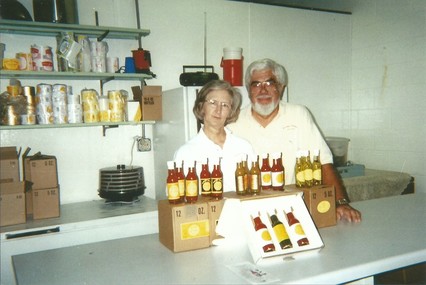 Fred’s half –acre pepper patch produces peppers from mid-July until frost. Since 2000, with the help of 2 to 4 local farmers, Fred has grown all the peppers used to produce all the Alabama Sunshine products. Throughout the year, Fred and Sally recruit temporary help from various family members and friends, who provide assistance with planting, harvesting, processing, marketing, or technology. However, Fred has always maintained close control of the production of Alabama Sunshine products from “seed to sauce”.  Early in the year, Fred orders seeds and a nearby nursery grows the seeds until the plants are ready for planting in the prepared pepper fields.  Approximately, twelve different varieties of peppers are grown each year.  All the peppers are handpicked at just the right color for the production of a particular product. After the peppers are washed, stemmed, and chopped for processing, they are either steamed for immediate production or frozen and stored to provide the Smiths with a year round supply of peppers.  Alabama Sunshine products are currently sold all around Alabama, as well as southern Tennessee and eastern Mississippi. With internet sales, Alabama Sunshine products are shipped throughout the country.  Some products are also produced under private label agreements.

Over the last twenty years, Fred and Sally have taken Fred’s passion for his hobby and grown it into a thriving small business. Since the beginning, Fred and Sally Smith have dedicated themselves to making products that they personally enjoy. Fortunately, lots of other people enjoy their products just as much as they do. That’s how the reputation of Alabama Sunshine has grown through the years.  Now with plans for retirement, the Smiths are ready to train the next era of pepper growers who will use their harvest to make the same great Alabama Sunshine products that loyal customers have enjoyed for years. 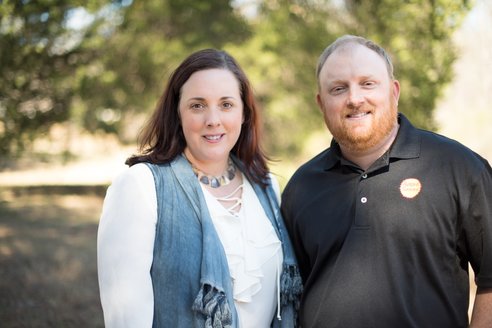 ​     Brother and sister team, David Lee Smith and Julie Smith Madison are eager to allow Fred and Sally to use their years of experience to mentor them in everything they need to know about farming, processing, and marketing peppers and pepper products.  David and Julie are proud to continue the Alabama Sunshine history and tradition of local people using locally grown peppers to produce tasty gourmet products in Fayette, Alabama. With the common goal of helping Alabama Sunshine grow, Fred and Sally will be there to help support and encourage David and Julie in their future efforts. Who knows what in the world they’ll put peppers in next?